It was raining when I arrived in Köln.

I was afraid that the bad weather would spoil my first opportunity to pay tribute to the three kings. Rain and cold weather – not a good idea for travel, I know.

However, the bad wheater did not spoil my visit.

The magnificent giant that is the Köln Cathedral (Photo: SAP Tiatco)

According to the brochure handed to me by the ticket counter staff when I went inside the cathedral museum (located from the back of the cathedral), Köln Domer is the most visited landmark in Germany, attracting an average of 20,000 tourists a day.

This amazing piece of gothic architecture currently stands as the tallest twin-spired church in the world at 157 m (515 ft) tall.

In 1996, Köln Domer was added to Germany’s list of UNESCO World Heritage Sites.

The brief synthesis of the inscription states that the building of this Gothic masterpiece took place in several stages and was not completed until 1880 (construction began in 1248). In addition, the cathedral was constructed by several builders who were “inspired by the same faith and by a spirit of absolute fidelity to the original plans.”

The cathedral was not only an architectural masterpiece but it is home to other forms of artistic masterpieces such as sculptures, paintings, stain-glass art, mosaic, frescoes, and other interior decorations. More importantly, the inscription states: “no other Cathedral is so perfectly conceived, so uniformly and uncompromisingly executed in all its parts.” In other words, the magnificent architectural giant is as magnificent inside.

The cathedral as viewed from a van along the Rhine River in Köln (Photo: SAP Tiatco)

Incidentally, in 2004, the Cathedral was placed on the “World Heritage in Danger” list due to plans of constructing a high-rise building nearby. [Oh no, the San Sebastian Church in Manila could now be in danger of not even making it on the tentative list. There is news about the construction of a high-rise condominium nearby]. The emplacement in the danger list is quite alarming because Germany already lost one World Heritage Site in 2007: Dresden Elbe Valley!

Fortunately, it was removed from the List of “In Danger Sites” the next year, following the German authorities’ decision to limit the heights of buildings constructed near and around the cathedral. 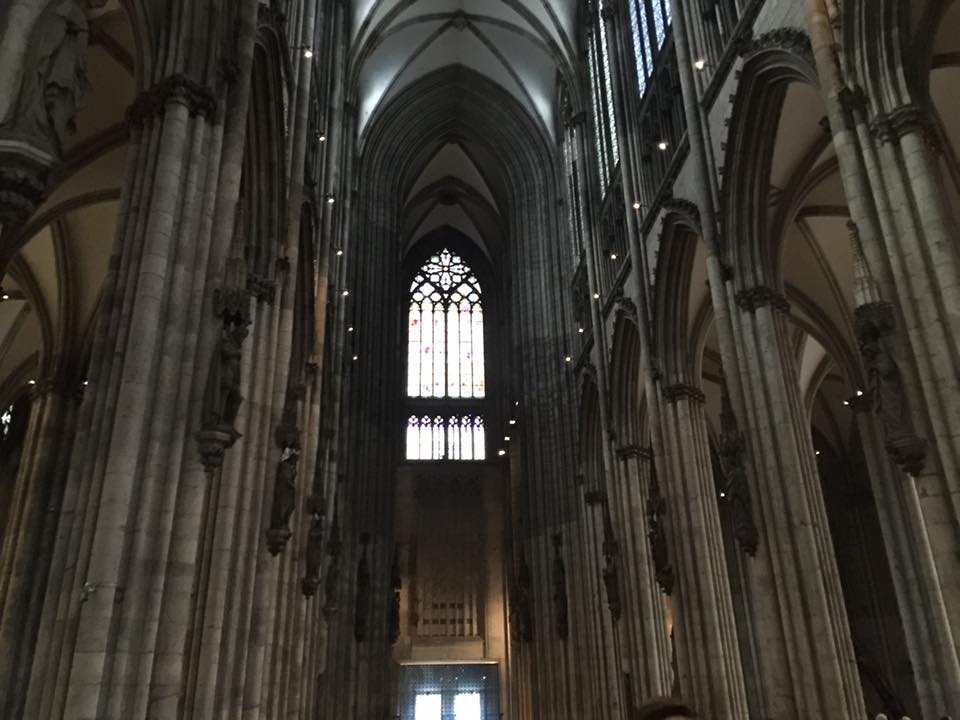 The huge columns inside the cathedral as seen in many Gothic Cathedrals in Europe (Photo: SAP Tiatco)

The design is quite similar to the Amiens Cathedral, also a World Heritage Site located in Northern France. I have not visited Amiens. But in the future, there are plans to see it. My only idea of Amiens comes from books and online resources. But many architect friends inform me about this similarity. In terms of the ground plan, it is in the shape of a cross, as is usual with Gothic cathedrals.

A pose inside the magestic interior of the cathedral

Back to the three kings: there are no written documents to prove that the biblical Magis really exist. In relation, no historical texts recorded that the Magis were converted into Christianity and even martyred during the Roman Empire.  Currently, the Catholic Church believes that the Magis were so moved by their encounter with Jesus. They either became Christians on their own or were quick to convert fully upon later encountering an Apostle of Jesus (during the spread of Christianity between 36 to 70 CE). According to Christian and Catholic traditions, they were so strong in their beliefs that they willingly embraced martyrdom.

An altar bas-relief found inside the Cathedral (Photo: SAP Tiatco)

According to the official website of the cathedral, the shrine of the Magis were brought to  Köln in 1164. It is not clear whether the relics belong to the Magis but since 344, the “Holy Roman Empire” believed that these relics must be venerated by the faithful. According to popular stories, the bones of the Magis were first discovered by Queen Helena on her famous pilgrimage to the Holy Lands. She took the remains to the church of Hagia Sophia (an inscribed World Heritage Site property, part of Historic Areas of Istanbul) in then Constantinople (present-day Istanbul). The relics were later moved to Milan before being sent to their current resting place in Köln by the Frederick I in 1164.

One of the many mosaics inside the Cathedral (Photo: SAP Tiatco)

In spite of this, the attributed tomb of the Magis has become an important pilgrim object at Köln. When you get a chance to visit the place, do not forget to sit down, close your eyes and contemplate the Nativity. Imagine how these wise men traveled so far to reach the North Star and later felt an impressive presence of the Divine in the child Jesus, whose birth is celebrated every year on the 25th of December.