For a long time, four things come across my mind each time I hear  “The Three Kings” or “The Three Wise Men” or in biblical terms “The Three Magi.”

First, I think of them as Gaspar, Baltasar, and Melchor because this is how they are called in the Philippines. In relation, I also think of the gifts they presented before the child-king in the manger: myrrh, frankincense, and gold. In the history of salvation, their story first appeared in the New Testament, particularly in the gospel of Matthew (2: 1 – 12).

In the excerpt below, they are referred to as the wise men, who King Herod sent to Bethlehem in Judea to look for the child-king: “Then Herod secretly called for the wise men and learned from them the exact time when the star had appeared. Then he sent them to Bethlehem, saying, “Go and search diligently for the child; and when you have found him, bring me word so that I may also go and pay him homage.” When they had heard the king, they set out; and there, ahead of them, went the star that they had seen at its rising, until it stopped over the place where the child was. When they saw that the star had stopped, they were overwhelmed with joy.”

Second, the Catholic narrative reveals that these wise men were in a way “responsible” for Jesus to almost fall prey on the cruel hands of Herod. According to the biblical account (Matthew 2:16–18), Herod ordered the execution of all young boys, two years old and under in the vicinity of Bethlehem, for fear of losing his throne to a newborn king whose birth had been announced to him by you know who: Baltasar, Gaspar and Melchor.

In the Catholic tradition (history of salvation), this tragic event is celebrated annually every 28 December. The dogma is based on St. Augustine who mentioned the need to commemorate because the children “died not only for Christ but in his stead.”

Third, they are important figures during the Christmas season in the Philippines. They have become important icons that once displayed they hail every Catholic Filipinos that Christmas time is here and now. Commonly they are displayed in malls, Catholic churches and in private homes immediately after todos los santos (“All Saint’s Day ,” the commemoration of the dead in the Philippines) on 1 November. But there are some public spaces where figures of the Nativity of Jesus are displayed as early as September. You know – the Philippines is known for its longest Christmas season: September to December (we associate these months as the “ber” season; malls, radio and television stations start playing Christmas songs).

Fourth, the feast day of the Three Kings in the Catholic Church is called the Solemnity of the Epiphany celebrated every second Sunday of January. The concept of epiphany is attributed to the three kings’ turning away from Herod’s cruel intention. This is specifically referred to a sort of conversion of these figures from being non-believers to believers (that the child is the Christ, the Messiah, the savior, the king).

In the Philippines, this commemoration is known as Araw ng mga Tatlóng Harì (Three Kings’ Day; Spanish: Día de los Tres Reyes). Colloquially, it is called the Pasko ng Matatanda (Christmas of the Elderly). As a tradition, it marks the end of the country’s long Christmas season.

When I was a kid, I was told to leave my shoes outside the front door of our house. The intention then was to let the three kings see the shoes in order for them to leave gifts for me (like candy or money). On the bisperas (the night before the actual commemoration), my shoes are properly left outside the door. In the morning, I would always rush to the door and would be happy to see candies inside my shoes. The last time I had my shoes left outside the door (I was 12 years old), I wished for money and the next day, I got money. I am not sure though if kids still do this today.

When I was growing up, my worldview shifted from believing that the three kings were historical figures to mythical ones. I started to attribute them as symbolic images of the Catholic faith. I, however, never underestimated their important role in the Catholic faith. However, in October 2016, I visited a medieval gothic cathedral that claims to keep relics of the three kings: the Cologne Cathedral (Köln Dom).

That’s me, in front of the magnificent Cologne Cathedral

Going to the cathedral is not difficult. Once you get out of Cologne Central Station, it is just outside/across the main entrance of the station. For sure, you are not going to miss the cathedral because of its overwhelming magnificence that, as the saying goes, “stood the test of time” (i.e. the cathedral was spared during the Second World War). 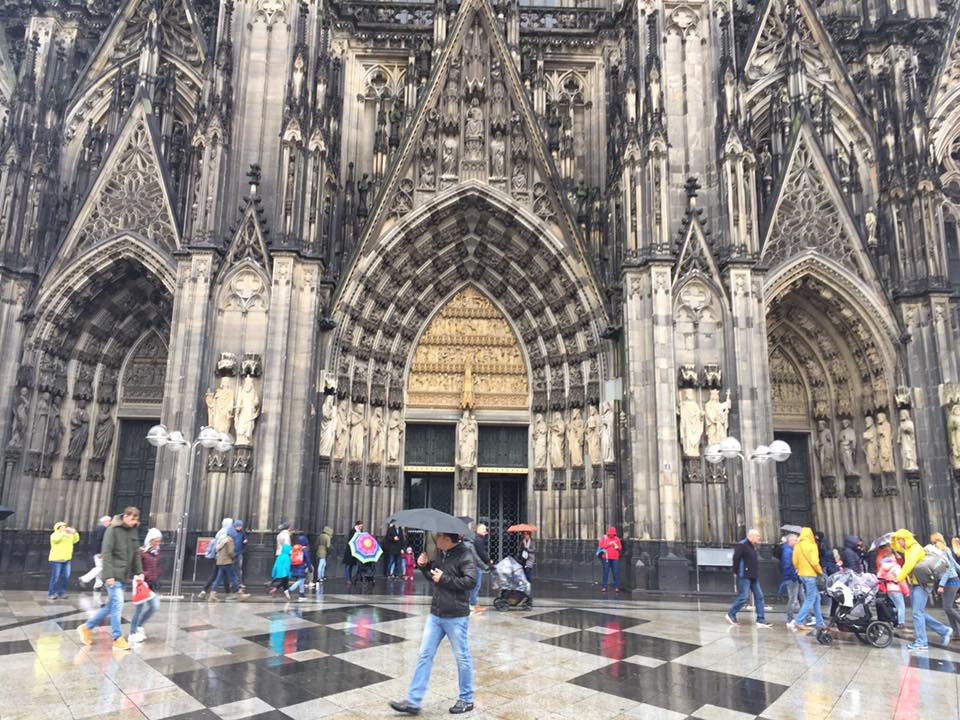 When I went to see the cathedral, I came from Frankfurt. If you decide to go to Cologne from Frankfurt, I recommend you go via train (at Frankfurt Main Central) and purchase a left window ticket (most of the trains to Belgium are passing by Köln Central). When the voice-over announced that the train was already approaching Cologne Central, magically the cathedral started to impose its amazing beauty.