During the closing ceremony of the 2017 International Federation for Theatre Research (IFTR) Annual Conference in São Paulo, Brazil, it was announced that the 2018 conference and world congress would happen in Belgrade, Serbia through the Faculty of Dramatic Arts, University of Arts Belgrade. I remember the awkwardness I felt about the announcement because the only thing I knew about Serbia was it being a former territory of Yugoslavia.

IFTR’s Welcome Banner at the University of Sao Paolo in 2017 (Photo: SAPT)

That night, I did some readings about Serbia (through the help of google!). Other problems popped out to a point of discouraging me to attend the 2018 conference/world congress. Serbia does not have a representation in the Philippines. The closest embassy is in Jakarta, Indonesia. I was hoping to secure my Serbian Visa from a VFS Global Office in Manila just like how I got Schengen Visa in the past. However, Serbia is also not a European Union member.

As I continued reading about Serbia, one information got my attention: it is home to Gamzigrad-Romuliana or the Palace of Galerius, an Ancient Roman complex of palaces and temples and the burial site of Emperor Galerius and his mother Romuliana (Romula in other texts). Sooner, this infatuation was turned into an almost obsession. Sort of saying, I would do everything to secure a Serbian Visa in order for me to see this palace complex (and of course to attend the 2018 IFTR Conference – wink, wink!).

My fascination with Gamzigrad-Romuliana was twofold. First, it is a UNESCO World Heritage Site. Inscribed in 2007 for its “unique or at least exceptional testimony to a cultural tradition or to a civilization which is living or which has disappeared” (UNESCO Criteria III) and for being “an outstanding example of a type of building, architectural or technological ensemble or landscape which illustrates (a) significant stage(s) in human history” (UNESCO Criteria IV), the complex stood the test of time near the Romanian-Serbian border.

Second, my interest in Medieval Theatre and Performance paved the way for me to understand more about Galerius’ life. Galerius was one of the Roman Emperors who used Christians as part of the spectacles of the ludi (Roman festivals). Incidentally, during his reign as Caesar, he came out with an “edict of toleration” (311 CE), which despite his strong prejudice against the Christian religion, “ended” the Great Christian Persecution (well, sort of).

Cut to the chase, I got my visa but it was a painful process (this is also worth sharing, perhaps on another post). Flying to Belgrade meant two things: to attend the conference and to visit Felix Romuliana. The conference was held from 9 to 13 July 2018, and on the 14th, I made sure to see this UNESCO World Heritage Site. 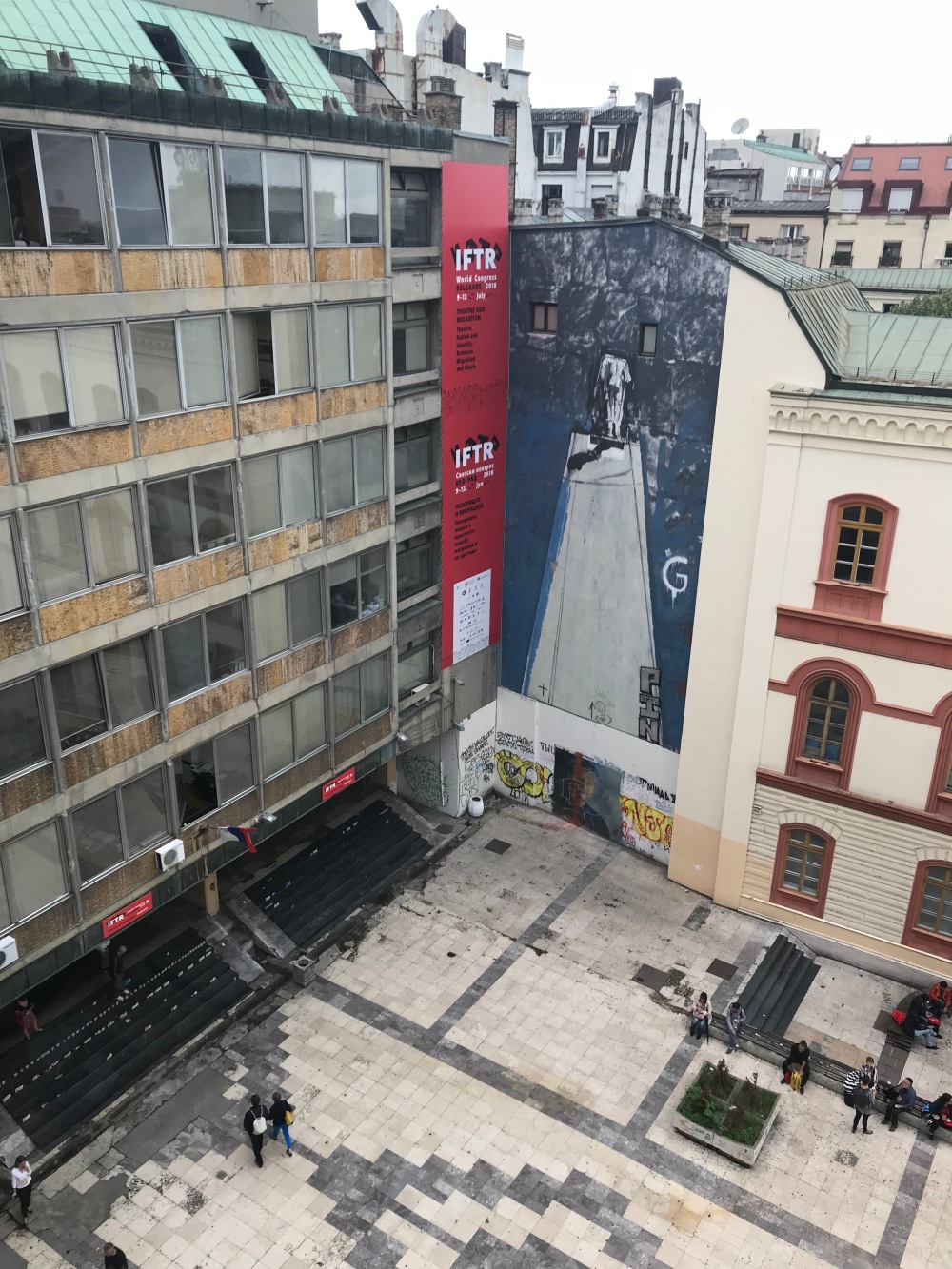 IFTR Banner at the University of Arts in Belgrade for the 2018 World Congress (Photo: SAPT)

Luckily, the conference’s host institution had a travel agent booth at the venue: Miross Travel Agency (Thank you Miross for saving me and for a very amazing itinerary. I give you 5 stars for an outstanding service). Its staff members are most helpful (Another 5 stars!). They drafted an itinerary and I gladly took it. My guide was Goran. I was happy that he knew Serbian history very well and that included some historical notes regarding Galerius and his massive complex.

The site is a 3-hour drive from Belgrade. At first, we navigated the expressway and after two hours, we exited towards the city of Zaječar. From the exit toll, another hour-long drive along a vast plain of sunflowers and wild shrubs. When we reached Felix Romuliana, it was like a whimsical moment for me because it was as if the complex just popped out in the middle of nowhere!

The Western Gate (Main Entrance) to the Site (Photo: SAPT)

From what I learned from Goran and Maria, the person-in-charge who welcomed us at the site, the palace was believed to have been built as Galerius’ palace of retirement. At the same time, it was intended for the deification of her mother Romuliana (something which will be discussed later).

Prior to the excavation of Felix Romuliana, many archaeologists believed that Galerius built a massive complex somewhere in the Eastern territories of the Roman Empire but nobody ever found the actual site until the 1984.

A model of the Felix Romuliana based on archaeological accounts (Photo: SAPT)

When archaeologists came across the ruins in the late 1800’s, they mistook it for a Roman military camp. It was only in the 1950’s when social scientists excavated sophisticated mosaics, white marble columns, and statues of Roman gods. The discovery led to consider it as something grander than a military base.

According to Maria, it was only in 1984 when the site was identified as Galerius’s due to the discovery of an ornamental arch with the inscription Felix Romuliana (do not look for it in the site, it is now kept in the Zaječar Museum for security reasons).

Also, archaeologists discovered a pilaster strip on the eastern gate depicting the second Tetrarchy, with Galerius and Constantius Chlorus at the top, below them the Caesars Severus and Maximinus Daia, and then the retired Augusti Diocletian (yes, the same Diocletian who was responsible for the persecution of many Christians) and Hercules (I don’t remember if they were referring to the mythic figure). Like the inscription, all of these are emplaced in the city museum but replicas are available for the pleasure of the visitors.

Posing in front of what is believed to be the palace hall of the complex (Photo: SAPT)

As I walked through time, I imagined how people inside the complex lived their lives. I was even intrigued by the mosaic of Dionysus, which was also discovered in the 1980’s (no – I did not see the mosaic itself – Maria just mentioned it. Today, this mosaic is in the museum at Zaječar). My wild imagination was convinced Galerius was a devotee of the playful god (but I wondered why it was not Bacchae because Dionysus was an Ancient Greek god).

One of the mosaics preserved in the complex (Photo: SAPT)

Anyhow, I asked Goran and Maria if Galerius and Romuliana had performances honoring the playful God. They did not have any idea but Goran mentioned there was a temple in the complex that looked like an amphitheater. That said, Galerius could have hosted performances of tragedies or comedies. Besides, these performances were performed as religious offerings. 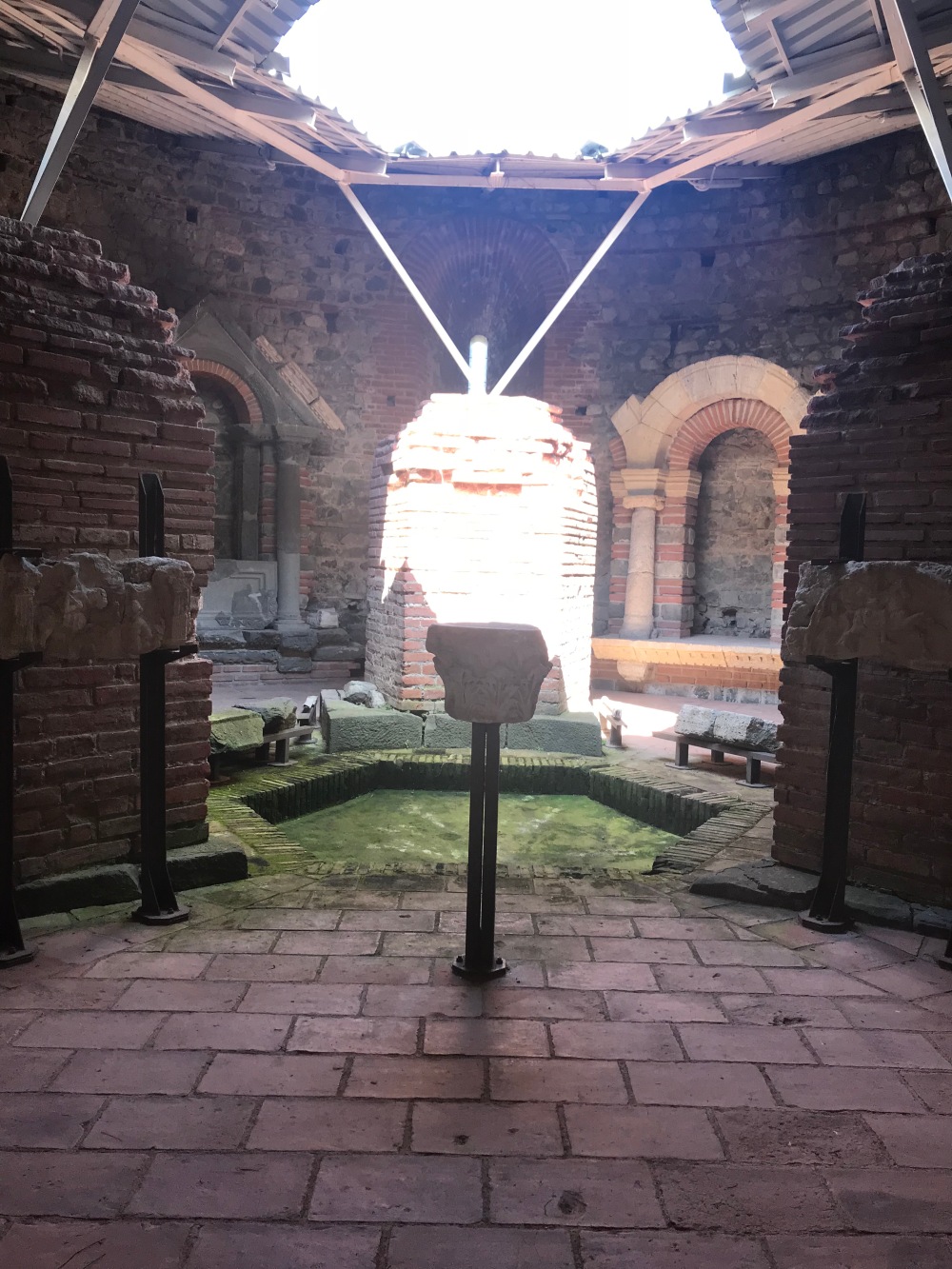 Inside of one of the towers (Photo: SAPT)

Archaeologists uncovered towers, ramparts, walls (fortifications), two monumental gates (entrance is in the west but do navigate the eastern gate and travel towards the hill, there’s a surprise on top of it waiting for you), a palace, a basilica, temples (a small and a large one), and a bath (spa).

My travel to the site was extended to the Magura Hill (starting point: Eastern Gate). At first, I was hesitant to follow the trail. It was a very hot summer day. But Goran was persistent. I did not know how long the trail was but it took us about 45 minutes to go to the top of the hill.

I was happy I said yes to Goran’s persistency. The topmost part of the hill was an important site. Romuliana’s and Galerius’s mausoleums are emplaced there. Few yards from their mausoleums are their respective tumulus (where their wax figures were burned during their respective apotheosis – or their deification). It made sense why the site was called Felix Romuliana. Felix was a Latin concept that referred to the deification of a human individual. When Galerius’s mother underwent the apotheosis, Galerius changed the complex’ name into Felix Romuliana, which meant the complex dedicated to the goddess Romuliana.

On the left is the mausoleum of Romuliana and on the right is Galerius’ (Photo: SAPT)

Before going back to the main complex, I went near Galerius’s mausoleum. I closed my eyes and silently whispered: thank you for saving several lives of many Christians through your edict of toleration.

Then, I felt the wind blowing calmly as if speaking “you’re welcome.”